so…anyone who’s been ’round these parts for a while has seen sarah and zach a few times.  their wedding was one of the ones i was most excited to shoot this year…and i knew their engagement session had to be epic.  for instance…zach’s idea was to find a bridge…and they would both jump off…naked…and kiss…in midair.  sarah and i both vetoed that idea, but the pressure was on to come up with something that would satisfy zach’s need to go big or go home.  i’m PRETTY sure we accomplished just that.  but the awesomest part of their session is going to have to wait for part 2.  (so y’all come back now, y’hear?)

we started off at portland velocipede…i met josh & gillian…its charming owners…a few months back in my european-style-bicycle obsessed haze.  i knew they’d be up for helping me do something fantastical for sarah & zach’s session…they didn’t disappoint!  they are always SO helpful and do their utmost to make sure your riding experience is nothing short of amazing.  even knowing we were just borrowing the bikes for a jaunt around the block, josh filled tires and adjusted seat heights for zach & sarah.  (i took one out, too…that was a frame size too big and the seat was probably too high, but i didn’t really give him a chance to do any adjustments!  and even on the wrong size bike…they just ride better in europe.) 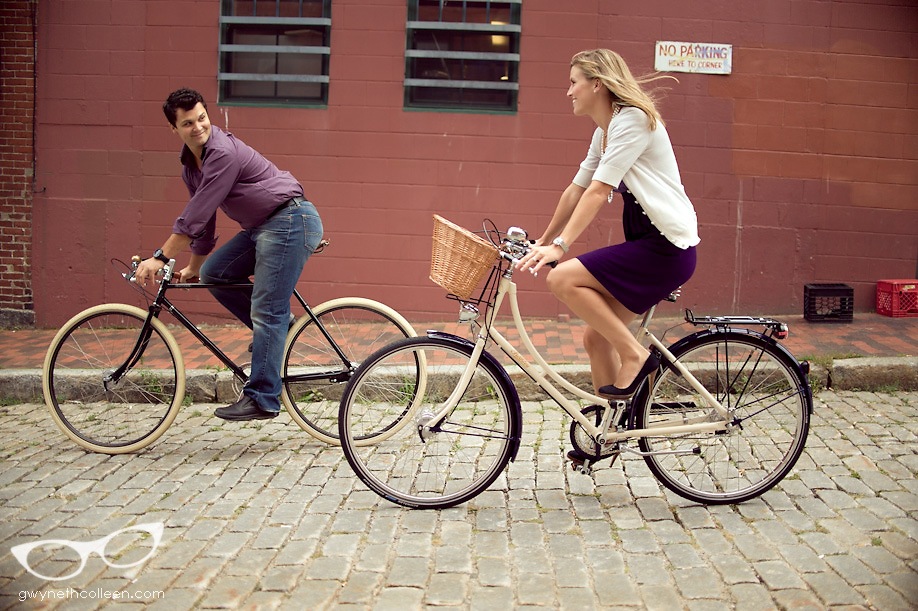 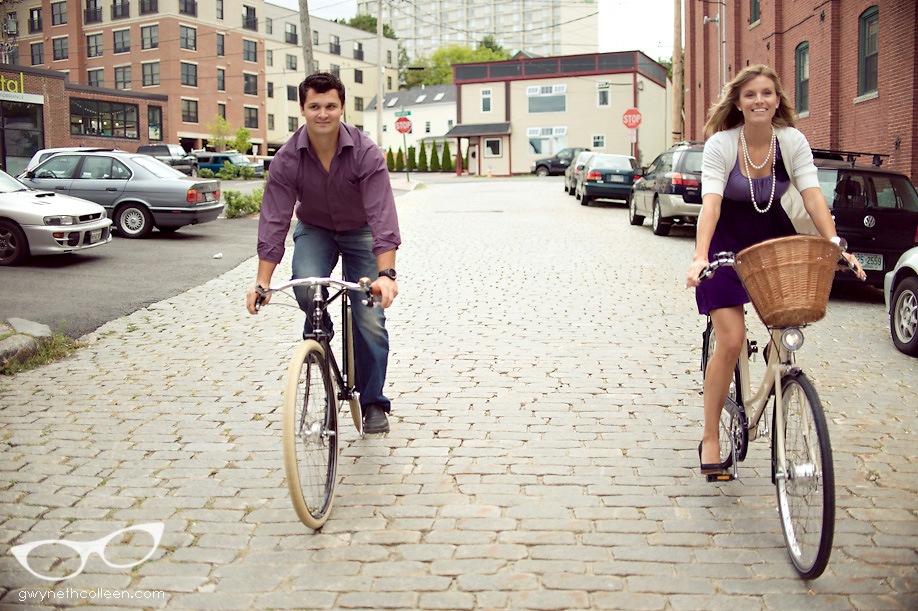 dunno if you can see it, but sarah’s cream and purple pashley sonnet bliss perfectly matches her outfit.  couldn’t have planned it better if we’d tried! 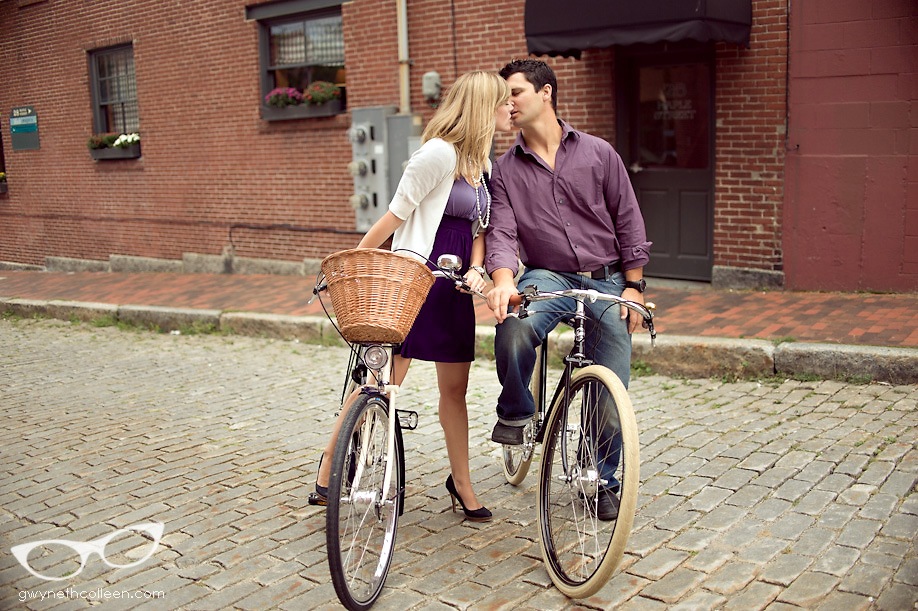 they also tried out some of the cargo bikes portland velocipede just got in…i believe this one’s a bakfiets.  when i was in copenhagen in may…i saw entire families in/on one of these babies!

while we were riding, josh even hopped on a pashley guv’nor and came to check how we were faring.

sarah hadn’t been on a bicycle in years…and was wearing a skirt and platform heels…and it took her all of 10 minutes before she was proclaiming that she wanted to take the sonnet bliss home with her!  (another brief plug for portland velocipede before i move on…go visit them.  ride a bike.  connect with them on facebook or twitter.  they’re awesome.  also, they have their first tweed ride coming up on nov. 7!  my new pashley britannia hasn’t been shipped from england (sad face), or i’d be there with tweed on!)

after a fun ride around old port…we set off on foot for another of my crazy ideas.  (some of this crazy will make a LOT more sense in part 2.  some will probably still just be crazy!)

after a brief staring contest…zach proved to be more open-minded.

i think i’ll leave the others for part 2…

back to Top•get in touch•share on facebook•email to friend
Show Hide 4 comments
Matt Keo1 November 2010 - 17:28

I think this is soooo cute!

[…] saw part 1 last week…and i’m a bit behind the times, since they’re already married, but this […]

My favorite session of yours. Eva!

[…] sunday i met up with jill + greg (who went to high school with my beloved sarah + zach) in NJ to capture this time in their lives when they’re young, independent, living in (near) […]