wow i have a lot to say about this wedding.  can you handle a long post?  oh good.

so, first off…the way i met sarah & jeff is a really, really funny story…and you should ask me sometime, and i will tell you, but i will not tell the entire internet.  sry.  (i know, i’m a TEASE!)

sarah comes from a big family.  like…she’s the 2nd oldest of 8 children.  7 of whom are girls.  one of the things i like about families like this is the spirit of cooperation and camaraderie they exhibit…a wedding becomes a collective project…everyone takes on a task or two and they pour their love and affection into everything and make it happen.  sarah’s wedding was no exception, but…her family largely lives in saint louis and the wedding was in nh.  sarah & jeff still wanted their wedding to have that community project feel, but the logistics of finishing up all the projects in the week before was just a little unrealistic, so their nh family banded together and pulled off a pretty amazing shindig.  friends volunteered to buy and prepare tasty picnic eats for all the guests (and it was goooood…chicken kabobs and grilled veggies! a rice dish (that i didn’t try because i’m a weirdo picky eater), chips and salsa, lemonade, peach tea, and ice cold refreshing water.)  everyone got plenty to eat…pretty fantastic.  watching the friends who volunteered to collect and transport the grills, the ones who helped prepare the food, the ones on grill duty all arrive at the beach the morning of the ceremony was a testament to the kind of people jeff and sarah are; people love them and gather around them to demonstrate their love and support.  i feel privileged to be included in that nh family that helped make this day a reality.  (sarah’s family was here the week before and made the cupcakes, threw her a bridal brunch, helped them pack their truck to move–oh, did i forget to mention they’re driving off to TN 3 days after their wedding date so jeff can start his new professor job?  they are.  both families were in town and were no slouches when it came to participating in projects left to tend to.)

if you’ve been in new england for more than 3 days this summer, chances are, it’s rained at least 2 of them.  the day started off grey with ominous drops appearing sporadically on my windshield as we drove to rye harbour.  they held off, though, and gwyn-the-photographer rejoiced at the even, grey clouds that covered the sky and diffused the light beautifully.  father michael of st. george’s delivered a touching homily–the kind only an officiant who knows and loves the couple pledging themselves to each other can prepare.  jeff and sarah served communion to the astonishing number of people who came from near and far with 2 months notice to celebrate their marriage.  and right as the ceremony was concluding…the sun came out and shone down upon them.  (everyone else was amazed and awed and touched.  gwyn-the-photographer thought, “DANGIT…there goes my perfect midday lighting!”  gwyn-the-friend agreed that it was a beautifully symbolic moment.) 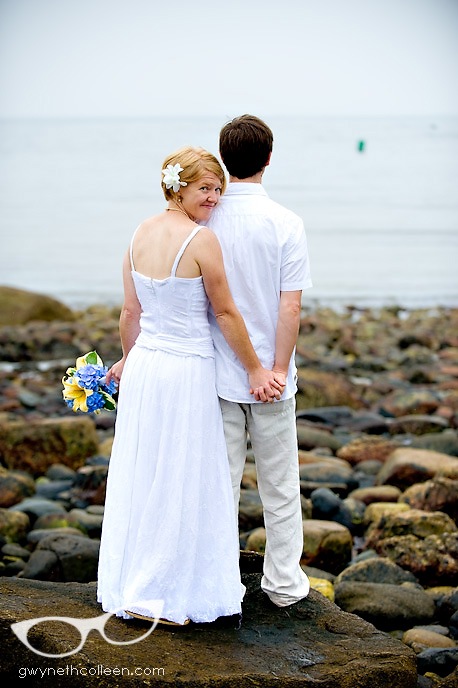 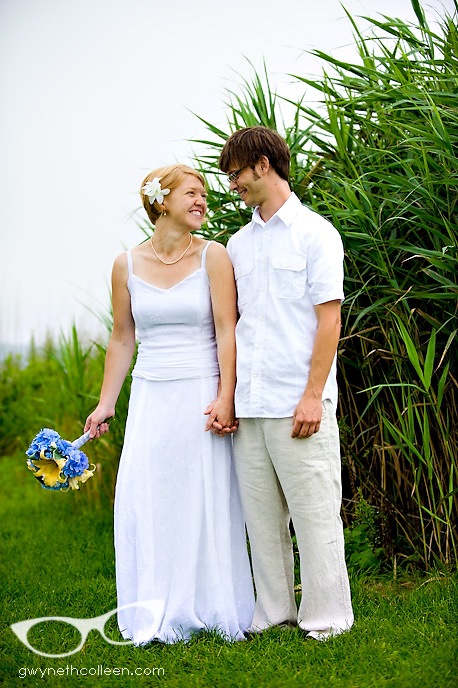 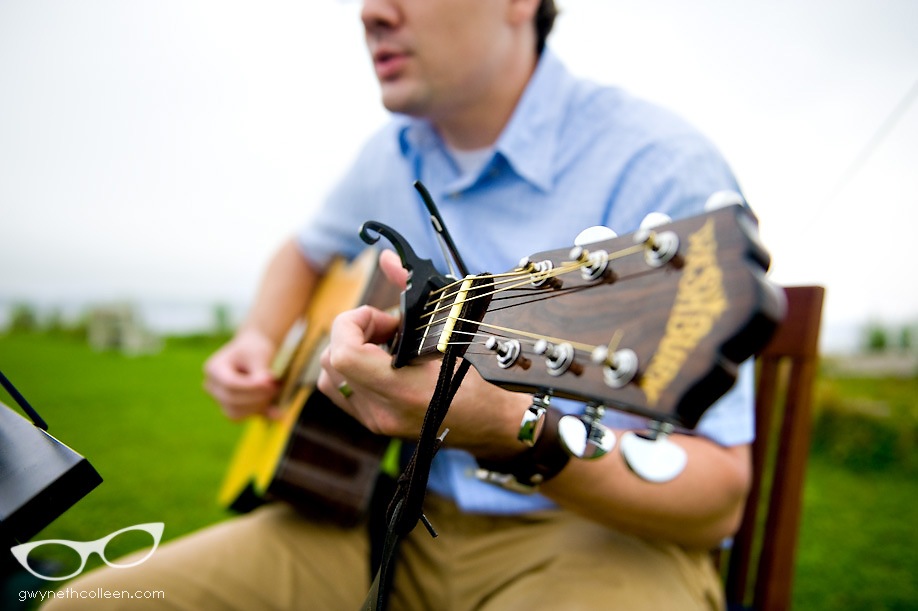 this is adam. he and his bike had a run-in with the front end of a car about 2 weeks ago…miraculously, God had his hand on him, and his injuries were relatively superficial considering that his helmet broke the windshield. it’s amazing that he was still able to play the songs he’d been preparing for sarah & jeff. (some of my favourites! “come thou fount of every blessing” and “be thou my vision”.)

i don’t know who this is…but isn’t it cute?

they got choked up as they were saying, “in the name of the father, the son, and the holy spirit, i honour you.” i was so glad to see how overcome they were by the weight of what they were promising each other…i know they will love each other well, and their relationship gives me hope…they are proof that it’s worth waiting for the right person.

this chuppah was one of my contributions to the day. becky and i made it for another mutual friend’s beach wedding, and i thought, hey! that should be reused for sarah & jeff’s wedding! in case you’re wondering, 8 foot poles WILL fit in a volkswagen golf…run them diagonally from the front passenger seat through the rear driver’s side window.

sarah’s nephew blaze huddled close during the blessing of the elements for communion.

her other nephew, luther, is a delightful urchin…the clover, the bits of…whatever…clinging to his face…the RAAAAHHHH facial expression…i showed this image to sarah whose reaction was, “this is SO HIM!”

about halfway down the aisle they broke into a skip…very them.

they asked me to submit this one to at&t for their advertising campaign…(ok, not really, but it’s funny, right?)

like i said, the sun came out right at the end of the ceremony, so the only place with even lighting in the harsh noon sun was against this blue wall. we decided to have some fun with the bridal party (or rather, i very wisely intuited that this group would NOT get serious for me…so i might as well embrace it!)

i think those might deserve their own post, though, so…tune in later!
(i have to be up in about 4 hours to meet the happy couple for breakfast before they desert me for the hills of tennessee.)