this might be a record: blogging a wedding the same week i sent the images to the clients! (ok, no…i HAVE done this before, but i’m a delinquent blogger, so i haven’t done it ENOUGH.)

i love all my clients, but houston + christy are special. i was introduced to them by one of my besties…and they welcomed me into their little community down in montrose. i joined them for their new year’s eve celebration…i saw houston practice his mad bar tending skillz…(let’s be honest…i drank the fruits of said practice.) i’ve met their kitty…slept in their spare bedroom…i did christy’s hair for their engagement session…was there the morning she had to go see the seamstress about getting her dress altered. when i say they invited me to join in their celebration, i mean, i really became a part of it…i become friends with most of my clients, but some become friends for life. houston + christy fall into that category. 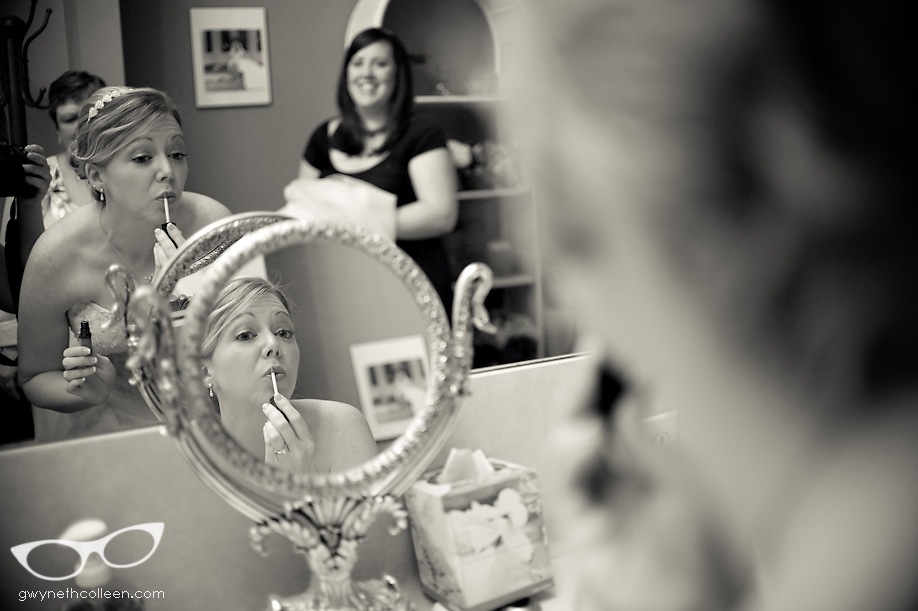 they chose to see one another before the ceremony, and it was beautiful. tensions run high on a wedding day, and these two’s cares visibly melted away when they saw each other. “oh, it’s you.” 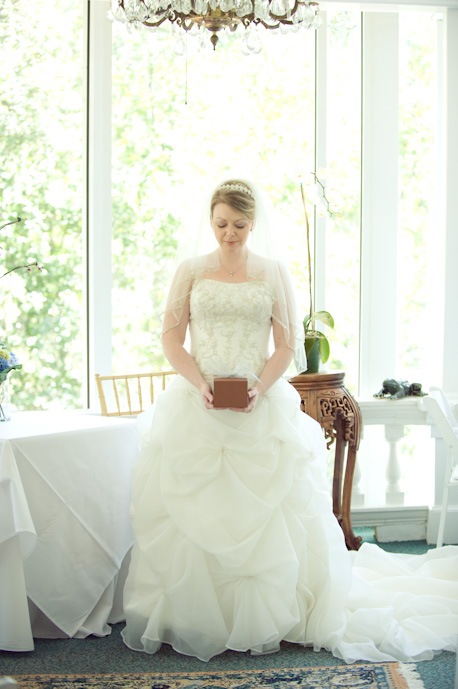 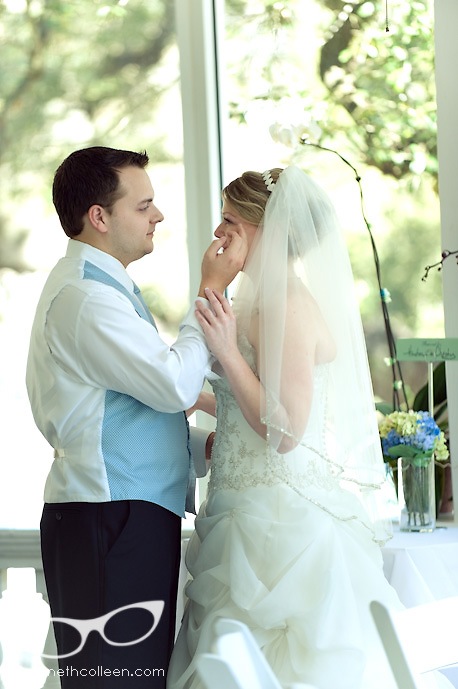 we then had time to do portraits of the smokin’ hot (hobbit) couple…as all their friends call them. (hey! i can say it b/c christy and i are the same height!)

anyone who knows houston will laugh, because this is just SO HIM. and christy is just…stunning.

christy and her best friends watching all the guests arrive.

christy’s father was ill and unable to be there, so houston went and met her halfway, and they continued to the altar together.

they took communion as part of their ceremony, and christy forgot that she was doing this in front of a hundred plus people and pulled a nice healthy bite of bread from the loaf. the assembled guests then waited very patiently while she chewed. and chewed. and chewed. (and giggled quite a lot in between.) moments like this…the unscripted “mistakes” are often the parts of the wedding day that people hold most dear in their memories.

i like to remind grooms…”when you kiss her, make it count! a quick little peck doesn’t work for photos!” houston’s response? “don’t worry; i’ve done this before. kissing! that is.”

this couple got married just a couple weeks after christy + houston, and they said this is their favorite picture of them ever. i’m hoping that’s not true anymore, now that they’ve got wedding pictures! capturing moments of connection between friends and family at the party contributes to telling the story of the entire day.

houston’s grandpa. don’t you kind of want him to be your grandpa, too?

(thanks to the guys who decorated their car for setting me up for this one!)

back to Top•get in touch•share on facebook•email to friend
Show Hide 7 comments
Christy Farris21 April 2010 - 20:02

My wedding day was everything I ever dreamed it to be. I married my best friend and felt like a pretty princess bride at the same time, now that’s success. Unfortunately as wedding days go, it was very fast and one big blur to us both. It wasn’t until I got my pictures from Gwyn that it all came together for me. I got to slow down and see the moments she captured, and they took my breath away. Not only am I taken aback by how beautifully Gwyn took the pictures and how lovely everything came together…but she also captured “us”, our personalities and our love for one another. I spent two hours looking through these photos and cried by how touched I was from all the moments, glances, and emotions that were present that day and Gwyn was able to capture. I couldn’t imagine them any better and I am eternally grateful for Gwyn’s gift and utter genius. 🙂 Also, I made a new friend and she’s just lovely! When you know your photographer you feel safe and you can ejoy it. Gwyn made us feel like we could do no wrong! I loved it.

Love, love, love the portraits under the trees! Such awesome spring color!

I love your couple shots! All of the shots along the metal fence and with those beautiful flowered trees. Great job 🙂

I just gotta say again that you rock. I just love all of Christy and Houston’s pictures.

[…] houston + christy got their album this past week…it was a STUNNER (i wanted to get to the post office before it was dark, so i didn’t take any pictures of it before sending it off)… […]